What are the advantages of magnetic linear encoder over optical encoders?

Magnetic encoder technology virtually eliminates one of the primary drawbacks of optical encoders — sensitivity to dirt, dust, liquids, and other debris. Because optical designs rely on either the reflection or refraction of light, anything that interferes with the light’s transmission can cause a problem with the signal. Because magnetic coders don’t rely on “line of sight” to measure position, contamination doesn’t affect their performance. 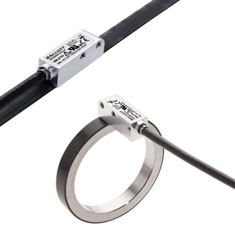