What are smart level sensors from Balluff?

Capacitive sensors are used for level indication of a wide variety of materials ranging from dry bulk materials, such as powders and granulate, to liquid compositions. Liquids impose a special difficulty for level sensors in general, since some of them tend to foam, whereas others are adhesive or tend to create extensive amounts of material build-up on the sensors or the container walls.

Balluff SmartLevel™ capacitive sensors provide accurate level detection in demanding applications where extensive foaming, filming, and material build-up are present. Their groundbreaking sensing technology allows SmartLevel™ sensors to reliably distinguish between true liquid level and foam, film, or build-up which would cause conventional capacitive sensors to false trigger. SmartLevel™ sensors are only suitable for water-based liquids or other highly conductive liquids. They automatically tune out plastic or other non-conductive wall materials without teach-in procedures or other user interaction, dramatically reducing assembly time and simplifying setup routines. SmartLevel™ sensors are available in a wide range of housing shapes and materials – including M18 and M30 in PVC or PBT housings. The PTFE line offers complete PTFE housing and cable in M18, M30 and Ø50, which are suitable for the harshest chemical environments. 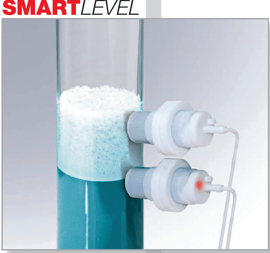